Well, let’s see. We’re into about month five or six of the coronavirus pandemic that has already killed tens of thousands of Americans and crippled our economy. And let’s be honest about it. The advice that members of the administration — and this includes the good doctor Fauci — has given us since the beginning has been misleading or in many cases just plain wrong.

Wait. I have to go wash my hands. While I’m gone, let’s check in on POTUS and see what he is doing to protect Americans and solve this crisis.

It’s bad enough when people like Trump and Fauci flounder, but when the most incompetent member of the administration, Betsy DeVos, joins the fray, it should be enough to send even the most naive mask-adverse patriot to get in the queue for a ventilator.

Devos, who somehow made enough campaign donations to get appointed Secretary of Education, wants the schools to open pronto — and risks to students, teachers and staff be damned.

Here’s what she told Fox news:

Education Secretary Betsy DeVos told “Fox News Sunday” that public schools that don’t reopen in the fall should not get federal funds, and that the money should be redirected to families who can use it to find another option for their children.

Why it matters: The Trump administration is engaged in a full-court press to reopen schools this fall, despite warnings from some public health officials that the coronavirus outbreak is out of control in many states and that it will be difficult for many schools to reopen safely.

Grilled by Fox’s Chris Wallace on what the administration is doing to make to make it safer or more feasible, DeVos repeatedly stressed that “kids cannot afford to not continue learning” and that she’s not talking about places where the virus is “out of control.”
“We’re talking about the rule, not the exception. And where there are hot spots in the future and in the fall, of course that has to be dealt with differently,” DeVos said.
On CNN’s “State of the Union,” DeVos was asked whether schools around the country should follow the CDC’s guidelines for reopening. She appeared to indicate there would be room for flexibility, stressing that the guidelines are simply recommendations.

“Every situation is going to look slightly different. And the key for education leaders, and these are smart people who can figure things out. They can figure out what is going to be right for their specific situation. Because every school building is different, every school population is different,” DeVos said.
President Trump has called the guidelines “very tough and expensive,” and Vice President Pence said the agency will put out a set of new documents about schools this week.

Reopening schools under these conditions seems to me to rely on a strong measure of wishful thinking, just like Trump’s belief that the virus will somehow magically disappear.

And it doesn’t appear that there is a universal consensus that opening schools now is the right thing to do.

Internal documents from the US Centers for Disease Control and Prevention warned that fully reopening K-12 schools and universities would be the “highest risk” for the spread of coronavirus, according to a New York Times report, as President Donald Trump and his administration push for students and teachers to return in-person to classrooms.

The 69-page document obtained by the Times marked “For Internal Use Only” was among materials for federal public health response teams deployed to coronavirus hotspots to help local public health officials handle the outbreak, the newspaper reported.
The document was circulated this week, the Times reported, as Trump slammed the CDC guidelines around reopening schools and he, Vice President Mike Pence and Education Secretary Betsy DeVos increased their pressure on schools to fully reopen by the fall.
It is unclear whether the President viewed the CDC document, according to the Times.

And it appears that even the American Academy of Pediatrics is having second thoughts:

The American Academy of Pediatrics on Friday flipped its position on reopening schools in the fall, distancing itself from the Trump administration, which cited the organization’s initial stance in order to bolster its push to reopen all K-12 brick and mortar schools.

“Returning to school is important for the healthy development and well-being of children, but we must pursue re-opening in a way that is safe for all students, teachers and staff,” the AAP said in a statement. “Science should drive decision-making on safely reopening schools.”

The AAP added that public health agencies “must make recommendations based on evidence, not politics” and said “schools in areas with high levels of COVID-19 community spread should not be compelled to reopen against the judgment of local experts.

“We should leave it to health experts to tell us when the time is best to open up school buildings, and listen to educators and administrators to shape how we do it,” the AAP said.

” We should leave it to health experts…”

Well, in this environment, good luck with that. 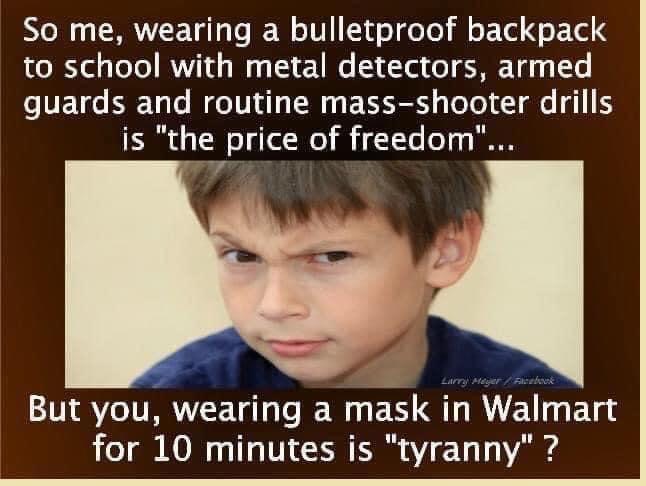 Well, as with most things, I don’t have a solution to this. It is a complex challenge with plenty of lives and money at risk. But shouldn’t it be a decision based on science and not politics?

So if I were still teaching at Kent State, would I show up in the classroom in another month or so?

Yes. It was my job. And I guess if people can work 40 hours or more a week at Walmart to make sure we have toilet paper then I could spend time in a classroom. But you can be sure I would take whatever precautions — social distancing, wearing a mask and so on — that I could.

And I would want to make sure that schools were being reopened after a careful study by health experts and administrators who have my best interests — and the interests of students, faculty and staff — at heart.

Fortunately I no longer have to make that decision.

But here’s the rub.

So would you send your children back to school this fall?

I’m not so sure I would.

But I’m sure I would base the decision on medical experts were telling us — and not on the mostly faulty advice of politicians like POTUS and Betsy DeVos.