I guess few marriages exist for any length of time without some disagreements. And it appears the current President and First Lady are in this situation, which often leads to some chilly interactions between the two. 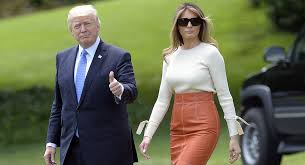 But forget Stormy Daniels and any of the President’s other alleged indiscretions.

It seems to me that Melania and the Prez are quite possibly mostly at odds about who controls the TV remote on Air Force One and possibly other locations in and out of the West Wing.

Here’s from The New York Times:

On the first couple’s recent trip overseas, Melania Trump’s television aboard Air Force One was tuned to CNN. President Trump was not pleased.

He raged at his staff for violating a rule that the White House entourage should begin each trip tuned to Fox — his preferred network over what he considers the “fake news” CNN — and caused “a bit of a stir” aboard Air Force One, according to an email obtained by The New York Times. The email, an internal exchange between officials in the White House Military Office and the White House Communications Agency last Thursday, also called for the ordering of two additional televisions to support Beam, a TiVo-like streaming device, to make sure the president and first lady could both watch TV in their separate hotel rooms when they travel.

Watching TV in their separate hotel rooms when they travel. Wait, is this on the taxpayer’s dime? I digress.

Anyway, is there a husband anywhere who can’t have a little sympathy for the President’s inability to control the TV remote? Yes, let he who has never had the channel switched from a football game to a rerun of General Hospital throw the first stone.

And apparently, Melania is keeping the remote on a short leash.

Again from The New York Times:

On Wednesday, Mrs. Trump’s spokeswoman issued a statement to CNN saying that the first lady watches “any channel she wants.”