Well, this should be interesting. For those of you like me who are old enough to remember Watergate, you’ll recall that one of the key questions posed as a result of the reporting by Washington Post reporters Bob Woodward and Carl Bernstein was “what did the president know and when did he know it?”

Tricky Dick Nixon is long gone. But now it looks like Donnie Doofus is going to have to deal with the same question. And once again it is Woodward who is shining the spotlight on presidential misconduct and incompetence.

This time the story involves the pandemic that has already killed nearly 200,000 Americans. And it is likely that at least some of those lives could have been spared if the current POTUS had been honest with the American people and taken some early measures that would have benefited the public and not necessarily his reelection.

Here’s from The New York Times:

“This is deadly stuff,” President Trump said of the coronavirus in a Feb. 7 interview with the journalist Bob Woodward for his upcoming book, “Rage.” But it was a vastly different story than he was telling the public at the time. Mr. Trump would later admit to Mr. Woodward that publicly, he “wanted to always” play down the severity of the virus.

Mr. Woodward conducted 18 interviews with the president for the book, which goes on sale next week. Mr. Trump also granted Mr. Woodward access to top officials inside the White House, revealing the inner workings of the president and his administration.

Mr. Trump minimized the risks of the coronavirus to the American public early in the year.

“I wanted to always play it down,” Mr. Trump told Mr. Woodward on March 19. “I still like playing it down, because I don’t want to create a panic.”

And while he was saying publicly that children were “almost immune” to the virus, he told Mr. Woodward in March: “Just today and yesterday, some startling facts came out. It’s not just old, older. Young people too — plenty of young people.”

I guess I could buy Trump’s argument about all this that he was trying to reassure the public and not create a panic if it wasn’t for the fact that he really has displayed no leadership during this entire crisis. Oh, and he is a pathetic liar. That doesn’t inspire confidence either. I digress.

Anyway, I’m not a big fan of insider tell-all stories. Trump’s niece, Mary, doesn’t seem to me to be the sharpest knife in the drawer. And Michael Cohen is, well, Michael Cohen.

But Bob Woodward. He is one of the last credible journalists in this country. IMO. Although it is a legitimate question to ask why didn’t he reveal this information when he first heard it from POTUS rather than wait until he was ready to publish his book.

The revelation President Donald Trump expressed serious concerns about the danger posed by the coronavirus outbreak, even as he downplayed the threat in public, drew outrage toward the White House and veteran journalist Bob Woodward for keeping the scoop quiet until the publication of his new book was imminent.

Woodward defended his decision not to share the revelation sooner in interviews with The Washington Post and The Associated Press after details from his upcoming book, “Rage,” were made public Wednesday. In audio clips from the 18 interviews Woodward conducted with Trump, the president says the coronavirus is highly contagious and “deadly stuff” while admitting he “wanted to always play it down” because he didn’t “want to create a panic.”

When asked why he didn’t share the discrepancies between Trump’s private fears about the virus and his public statements minimizing the danger, Woodward told AP he needed time to determine if Trump’s statements about COVID-19 were accurate.

Hmmm. That explanation by Woodward doesn’t really meet the smell test. Trump said what he said — and he said it on tape. That should be good enough.

But the bigger issue, I guess, is that Trump downplayed the severity of the virus and as a result the economy tanked and people died. 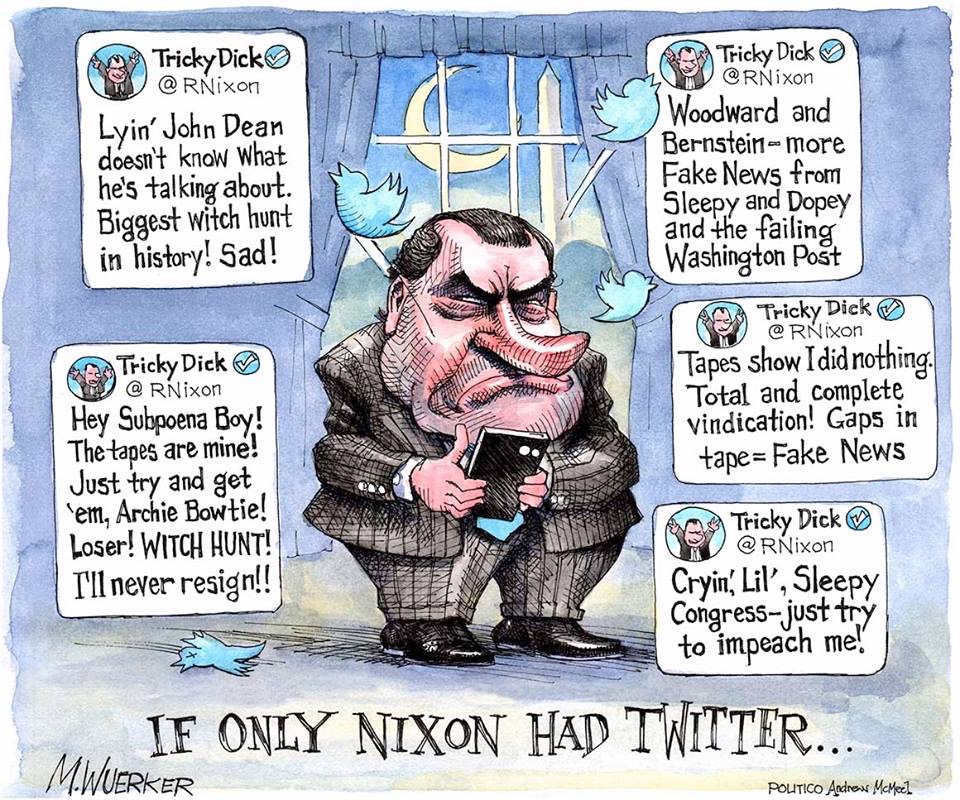 Well, we’ll have to wait for Trump to take to Twitter to set the record straight concerning what he told Woodward and what he told the American people.

Somewhere, Tricky Dick must be smiling.